Hard Fork: What Happens When a Cryptocurrency Splits In Two? 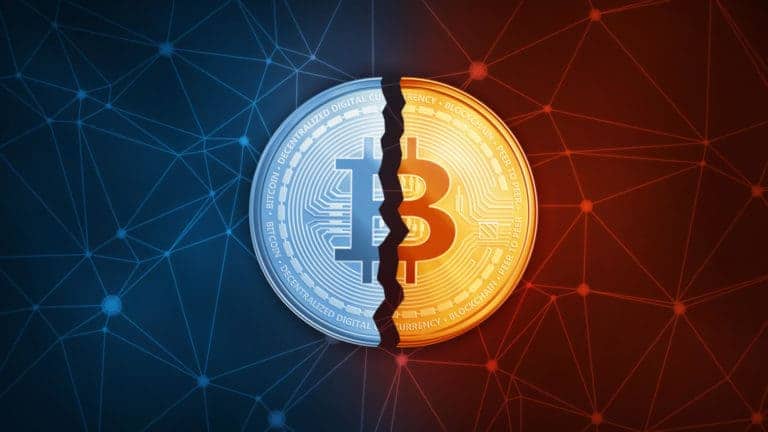 A hard fork is one of the most significant events in the cryptocurrency universe. But what is a hard fork? What causes a cryptocurrency fork and what happens after? In this guide, we explain why a blockchain splits and what it means for your cryptocurrency holdings.

What Is a Hard Fork?

Understanding hard forks requires knowing the basics about blockchain technology and what is cryptocurrency as an application of that technology.

Each Blockchain Has a Protocol

In very simple terms, a blockchain is a way of building and moving digital memory and using complex, cryptographic math to make that memory immutable and indisputable.

And because all of this is digital, it involves lots of software. That software establishes a cryptocurrency “protocol.” Protocols set the rules that everyone has to agree upon to use the blockchain and accept the validity of its memory, or ledger.

Here are a few rules a cryptocurrency protocol must establish:

Forks have to do with those rules, the protocol that sets the operating parameters of a blockchain. In other words, hard forks change how miners create blocks.

Why a Split Happens

Why do hard forks happen? Essentially, a cryptocurrency forks when its protocol is upgraded. Generally, this falls into two different categories.

Many times, hard forks are the result of disputes among the people most affected by a cryptocurrency’s protocol.

Software developers and miners working on a project decide something isn’t working for them. One group decides it isn’t satisfied with the current protocol and wants to introduce a change.

When these differences split a cryptocurrency’s community of users, a split is likely the outcome.

Not all hard forks are the result of irresolvable disputes among crypto developers and miners. Sometimes, they’re upgrades to the existing protocol to take it in a new direction, usually to specialize its use in some way.

Sometimes, a cryptocurrency splits to restore funds after hackers or other attacks compromise the integrity of the blockchain or make off with millions in cryptocurrency.

Despite the fact that no two cryptocurrency splits are alike, they all come about the same way. Each cryptocurrency involves a protocol and a blockchain.

The two blockchains, old and new, are incompatible. But they still share the original blockchain beginning with the block number that initiated it.

How It Affects Holders

When a split occurs, everyone on the blockchain receives as many cryptocurrency units in the new currency as they held in the old.

Lots of people think of this as “new money” or doubling your value. And while it’s true that you double the number of coins you hold, the value of the coins on the new chain will not be identical to the value of the old chain.

And that makes hard forks all about price discovery. How much are people willing to pay to buy or accept to sell the new coin? So how much your new crypto will be worth depends on the value it can attract.

Let’s look at the two most important blockchain splits in cryptocurrency history.

Users wanted faster transactions, so they proposed increasing block size and making block validation easier and faster. When the first block was created under these new rules, the original Bitcoin blockchain rejected it.

And meant that from then on, Bitcoin Cash would proceed on its own blockchain. Thus, we have Bitcoin vs Bitcoin Cash.

The hard form of Ethereum vs Ethereum Classic came about as the result of a $55 million cryptocurrency hack. After the attack, the Ethereum (ETH) network split into two cryptocurrencies, each on their own blockchain.

The Bitcoin Cash (BCH) blockchain is splitting on November 15, 2018. The Bitcoin Cash hard fork is the result of a rift in the developer community. The new currency, Bitcoin SV (BCHSV) will exist on a seperate blockchain.

In fact, Bitcoin Cash (BCH) is set to split every 6 months with planned protocol upgrades.

When a cryptocurrency hard forks, there are a couple things that holders of the new currency should keep in mind.

Hard Forks Can Be Beneficial

Dispute, debate—these are inextricable from a culture of openness, transparency and decentralization, meaning that a community rather than individuals controls a currency. This was the goal that motivated Satoshi Nakamoto to publish the Bitcoin whitepaper in the first place.